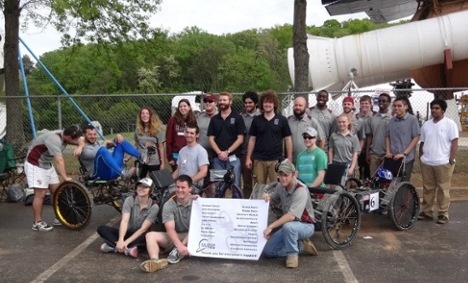 Pringle shoots for the stars

Zach Pringle certainly has his head in the stars.

Pringle, who graduated from SIU this spring with a bachelor’s degree in mechanical engineering, hopes to use his experiences and education to forge a career in aerospace.

His love for space and flight, in general, has always been with him. But his involvement with the College of Engineering’s “moonbuggy” team polished that desire to an even higher sheen.

“While on the moonbuggy team I've had a lot of involvement with NASA,” said Pringle, a Marshall native who is considering pursuing a master’s degree.

Each year, NASA holds its annual Human Exploration Rover Challenge at the Space and Rocket Center right next to NASA's Marshal Space Flight Center.  The event in its current form challenges students to design, build and race lightweight, human-powered roving vehicles, solving technical problems along the way in the spirit and tradition of NASA’s can-do engineers.

For Pringle, it was a stimulating environment.

“During the whole competition you are surrounded by various rockets, including the Saturn V, which was the rocket that sent us to the moon,” he said. “Even the starting line of the race starts underneath a replica of the space shuttle. I've met an astronaut, the original project manager of the lunar rovers and had a tour of the NASA research facilities. So interacting with these elements furthered my interest in aerospace. I would be really interested in working on propulsion systems or even astrodynamics.”

Pringle, the son of Lora and Michael Pringle, said he particularly enjoyed the machining and fabrication process associated with building the moonbuggies.

“I really enjoyed working in the machine shop and problem-solving how to build a design once it was drafted,” he said. “It’s a huge learning experience with equipment like the lathe, mill or welder, which are all vital for producing your design.”

Pringle served on the moonbuggy team for three years, including a year as vice president and as its current president. That time coincided with second- and third-place finishes at the competition in 2014.

“That was a great moment that I will always remember from my time at SIU,” Pringle said.

Pringle’s hard work and enthusiasm did not go unnoticed in the College of Engineering. Last year, he earned the distinction of being its Lincoln Laureate nominee. The Lincoln Academy of Illinois presents the award annually to one distinguished senior at each of Illinois’ four-year college and universities, as well as to one student from each of the state’s community colleges.

John Warwick, dean of the College of Engineering, said the college wanted to recognize Pringle’s devotion to his studies and the engineering program, including his efforts with the moonbuggy team when it traveled to Mt. Carmel High School in Chicago to give a presentation on their efforts.

“Zach and his moonbuggy team volunteered to help promote our college and the kind donation of an alumni (Tom Murray) at Mt. Carmel high school in south Chicago,” Warwick said. “The Mt. Carmel students were excited to engage with our students, and this type of positive outreach should increase the visibility of our college.”

“It was an amazing opportunity not only to encourage students to look into engineering but to help students put a face and name to SIU,” Pringle said. “So the team brought the moonbuggy into the lunch area and talked to the students during their lunch break. I was able to talk to students about our design and interaction with NASA while showing off a video of the team's race. It was a great opportunity to share my SIU experience.”

Pringle also took advantage of an opportunity that allowed him to study abroad in New Zealand during his junior year.

“That was a fantastic experience exploring a new country,” he said.

Pringle said he would recommend SIU to up-and-coming students based on his positive experiences.

“I’ve noticed several things. Each student has the potential to take what SIU offers and make something great out of it,” he said. “The engineering student organizations are one of those offers. They are an experience where students can grow and tune their leadership, engineering, problem-solving and management skills.

“I look back and see how much I’ve changed and grown with my time with the moonbuggy team,” he said.